St. Charles Catholic High School has long been a leader of educational technology in the River Parishes, but a recent grant from the Joe W. and Dorothy Dorsett Brown Foundation has allowed SCC to grow in their technological offerings.  Thanks to SCC’s leader, Dr. Courtney Millet, and the Head of the Science Department, Tina Jeandron, the Comets now have everything they need to learn using 3D printers and Tinkercad design software. These awesome new high-tech features of the science department will allow students to imagine, design, and create using this state-of-the-art technology.

SCC Junior Trey Romaguera said of the 3D printers: “When I first heard that we had gotten 3D printers at school, I immediately went to go look for them.  I had always taken an interest in building stuff on my own and creating stuff…The 3D printer gave me an opportunity to bring my creations from the virtual world into the real world, and not only that but see how well they would do when faced against the laws of Physics and gravity.”

Students at St. Charles have already used these printers to create models of double helix ladders while learning about DNA. They’ve also used it to create pieces for robots as they learned about engineering and design in the Robotics elective.  The Tinkercad software allows students to design in three dimensions, interacting with the X, Y, and Z axes. It also allows them to consider all components of a model before sending it to print since they have to visualize and consider the full scope of the structure before actualizing it. The method involved in creating these models and robotic pieces is a method that professional engineers and scientists use daily: namely, the scientific method, which requires a hypothesis and continual evaluation of the best practices to create solutions and innovations.

SCC parent Danielle Romaguera told the story of how her son’s use of the scientific method and 3D printer allowed him to find a solution to a household problem: “One day my youngest son and I were going to play chess and we noticed that one of our chess pieces was broken.  Trey overheard the conversation and told us that he could solve the problem for us.  Trey used one of the other pieces to figure out the scale and shape of the piece.  He was able to design a new piece on his computer and print it on his 3D printer.   Now every time we play chess at home and see that piece we are reminded of all of the possibilities that have been opened to Trey due to his knowledge and access of his 3D printer.  It has been a joy to see his creativity and knowledge be used to create not only useful objects, but also art.”

The Brown Foundation is a charitable organization in the New Orleans area that primarily serves as support for organizations in Louisiana and Mississippi, but their grants have been awarded to organizations around the country.  The mission of the foundation is to “alleviate human suffering” while providing resources for those in the Educational, Medical, Scientific, and Human Services fields.  Their grant program seeks to fund projects that will enhance innovation and serve community members associated with the organization.

SCC’s access to these resources and this technology will not only benefit the students at SCC, but it will in turn serve the larger community as these students grow into accomplished men and women who have learned to visualize and actualize the solutions and innovations that will help to serve mankind in the future.  As SCC continues to grow in their technological offerings, their students will continue to grow as well in their ability to make difference in the world. 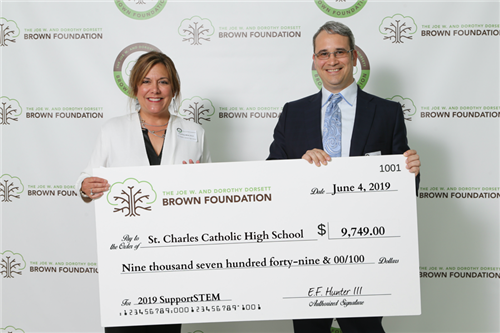