St. Charles Catholic High School announced the Royal Court members of the Krewe de Charles Bal Masque XXXIII, “Arabian Nights”.  The members of the court raised more than $17,000 for the school.  The annual carnival ball will be held on Saturday, February 1, at 7pm in the school gymnasium. Admission is $10.  SCC student admission is $5.

The King and Queen, who will represent The Sultan and Sultana, are Evan Beau Roussel, son of Terry and Melissa Roussel of Lutcher and Riley Rae Monica, daughter of Ty and Dennille Monica of Paulina. 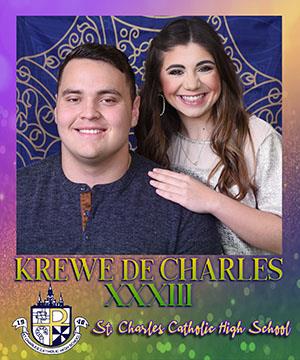 Both the King and Queen are very active students at St. Charles Catholic High School.  Evan Roussel is a member of the football and baseball teams and has signed a letter of intent to play football at Nicholls State University; he is also a leadership team member for the SCC Fellowship of Christian Athletes.  Riley Monica is an SCC cheerleader, National Honor Society member, an SCC Ambassador, and an FCA member. Riley is a junior and represents second generation Krewe de Charles royalty. Her uncles, Dustan and Donovan Louque were King of Krewe de Charles III and V, respectively. Her mom, Dennille Louque Monica was Queen of Krewe de Charles X.

Page to the King is Kase Andrew Roussel, son of Ory and Samy Roussel. Pages to the Queen are Frankie Marie Foulon, daughter of Ryan and Katie Foulon and Logan Elise Monica, daughter of Nicholas and Casey Monica.

Live student entertainment will include singing and dancing from our Cheerleaders, Starsteppers, and Stagehands. Songs from Disney’s Aladdin will be featured such as “Arabian Nights” and  “A Friend Like You”.

This is an evening for the whole family to enjoy and experience the Carnival tradition, student entertainment, and food & fellowship. Tickets will be on sale in the office beginning January 21 and are available at the door on February 1. Doors open at 6 pm and the Ball will begin at 7pm.