The Comets cross country team competed in the River Parish Championship Saturday, October 29. The course was at the Thomas F. Daley Memorial Park on Highway 51 in Laplace. The weather was warm and sunny and the course was relatively flat with several hills and some bumps. 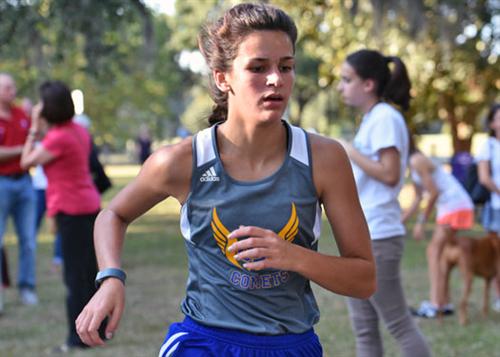 Some of the fastest teams in the state attended including, E.D. White and Vandebilt Catholic. Other teams in the meet were Destrehan, St. Amant, and East St. John.

Next up for the Comets is the distrcit championship Wednesday, November 2, at Audobon Park. The first event begins at 4:00 pm.

On September 29th the Cross Country team competed in the Newman Cross Country Classic. With great weather, everyone placed well individually within a large field of runners that attended. Victoria Portillo was our top girl finisher and Devon Rucker was our top boy finisher on the team.

"They did an extremely good job running in pairs and pushing each other." said Coach Montgomery. She thought everyone raced with the energy and competitive will to win. "I believe that we are getting better each and every day" said senior and captain Victoria Portillo.

On Saturday, the cross country team competed in the Cabrini Invitational at City Park, in New Orleans. The meet began with an open 1.5-mile race. Freshman Dominic Boesen and eighth graders Ashleigh Zaidain, Courtney Brower, and Alani Dew raced. All four of the runners did extremely well and Boesen was among the top finishers.

The open 1.5-mile race was followed by the 6-mile relay, which involved 4 members from each team each running one 1.5-mile leg each and passing a baton to the next runner. The girls’ race was led by senior Victoria Portillo, followed by freshmen Gabby Portillo and Jessica Basaildes, and anchored by senior Morgan Torres.

“I think it was  a great experience for everyone, and I believe that we’re going to have a great season if we all work hard, said Morgan Torres.

Both relay teams competed extremely well. The girls relay team placed 8th, which was a very solid finish for the Comets. “City Park is an extremely difficult course, and I am very pleased with how well the team ran. It’s a very young team, with a lot of potential, and this meet was certainly a good start, said coach Montgomery.

St. Charles Catholic will field a cross country team for the first time in three years. "I am extremely excited to be a part of the process of bringing Cross Country back to SCC;" said new head coach Mallory Montgomery. "Several team members participated in summer conditioning, and their enthusiasm for distance running and learning about cross country is very encouraging to me, as a coach."  Five of them participated in the Spillway Classic, which is a 5k mud run near the Bonnet Carre Spillway.

We are in a unique position where we have a group of students with a very diverse range of running experience coming onto the team. The meets that we have lined up will help each team member grow as an athlete and challenge them appropriately. Goals for the season are to teach the kids about cross country and distance running in general, to challenge the older and more experienced athletes on the team to step up as leaders, and to provide an atmosphere that supports teamwork, sportsmanship, hard work, and faithfulness.  "So far, I am extremely optimistic about what this season has in store for us."

The team currently consists of 18 runners who will compete in the first meet of the year this Saturday, September 3, at the Cabrini 6 Mile CC Relay in City Park.