The Lady Comets are on a 5-game win streak. The JV and Varsity opened district play on October 5 at Thomas Jefferson. After a close first game, the Varsity came out strong and defeated the Jaguars by scores of 26-24, 25-10, and 25-16. The team was led by Mya Brown with 12 kills, Morgan Nuccio with 7 kills and 2 service aces,
Madison Hebert with 6 kills and 1 ace, and Sarah Beth Sirmon with 4 kills and 6 aces.
On October 7, the John Curtis Patriots arrived for a district match up and were defeated by the Comets in 5 exciting games. After losing the first game 25-16, SCC won games 2 and 3 by scores of 26-24 and 25-20. John Curtis took game 4 - 25-16 and SCC took game 5 - 15-13. The Comet gym was full of energy as we defeated the Patriots to start district with a 2-0 record. Statistically, Mya Brown had 18 kills, Madison Hebert had 15 kills and 2 blocks, Morgan Nuccio had 11 kills and 1 service ace, Sarah Beth Sirmon had 38 assists and 1 ace; defensively the Comets were led by Camryn Triche with 7 digs, Hannah Brady and Sarah Sirmon with 5 digs each, and Haley Scioneaux with 4 digs.
The Varsity continued their win streak on October 12 and 14 by defeating St. James and Donaldsonville on the road. At Donaldsonville, the Lady Comets won the third game by a score of 25-0. The Lady Comets received the first serve from the Tigers and won the rally point. Sarah Beth Sirmon began serving and had 18 aces while Madison Hebert and Rylee San Andres each added 2 kills. This puts the Lady Comets in first place in district with a 4-0 record and 5-4 overall. Varsity will travel to Chalmette Saturday to play Chalmette, Thibodaux, and Ben Franklin. The team will be back in action on Tuesday at Comet gym when they take on Patrick Taylor for the district championship. The JV volleyball team defeated Thomas Jefferson and St. James. The team battled
with John Curtis in 3 games but fell short. They are currently 2-3 and will play Patrick Taylor on Tuesday at 4:30 pm in Comet gym. 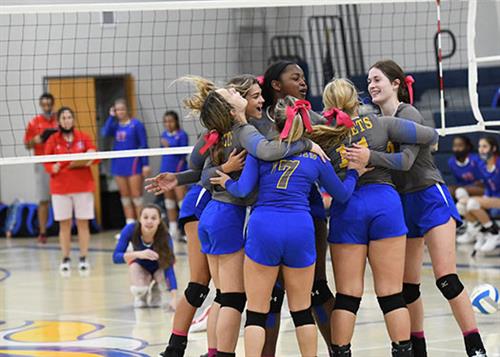