All season long, St. Charles Catholic has relied on a solid running game, an excellent kicking game and a superior defense to remain unbeaten.

The unbeaten record is intact, thanks to solid efforts on offense and in the kicking game but primarily due to one of the best, if not the best defense in the state.

Zack Vicknair ran for a pair of scores and Carter Chauvin made both extra points and kicked a field goal late and the Comets held on for a 17-13 victory in the Division III semifinals at Crowley.

The kicking game contributed immediately as Comets took an early 7-0 lead on a one-yard touchdown run by Zack Vicknair, set up by a long kickoff return to start the game by Kaden Foster. 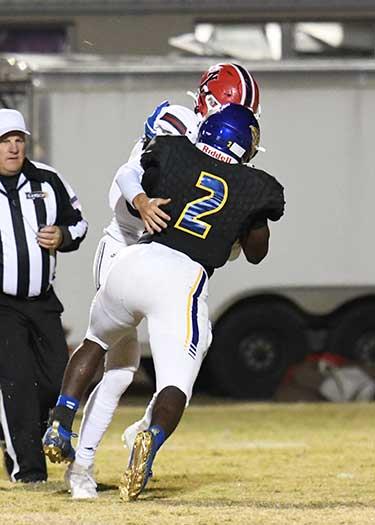 The Pios tied the game on the ensuing possession on a trick play as Nick Swacker connected with Zack Lamm on an 80-yard touchdown pass to make it 7-7.

Vicknair put the Comets ahead to stay early in the second quarter with a two-yard touchdown to make it 14-7.

Notre Dame scored in the third quarter on an 8-yard touchdown pass from Swacker to Joe Frank to make it 14-13 but missed the extra point.

Chauvin connected on a 33-yard field goal in the fourth quarter to make it 17-13 and the defense held the rest of the way to secure the victory. Kaiden Jones had a huge sack before Michael Hotard came up with the game-clinching interception for St. Charles Catholic.

Speaking on the Three Tailgaters Show on 106.1 FM NASH ICON Saturday morning, St. Charles Catholic coach Wayne Stein expressed how satisfied he was with the victory.

“It was a big win as very few people win in Crowley,” Stein said. “We won there in 2016 without scoring an offensive touchdown. To go into Crowley and beat a Lewis Cook team is special. It was an ultimate war. It was like playing against ourselves. We played well in the first half. We are where we expected to be. In the end, our kids made a couple more plays then they did.”

The rematch theme is solidly in place in Division II.

“Kaiden Jones, with the game on the line, took the game over with 11 tackles and two sacks,” Stein said. “You have to continue to play great defense against Notre Dame. They give you every possible look. The only first down we gave up the whole first half was the trick play. We held the ball for 17 minutes in the first half. They flipped the script in the second half, possessing it for 16 minutes. It’s the same mentality for both teams.”

It was the second straight year that St. Charles Catholic defeated Notre Dame in the semifinals.

The Knights handled Newman in the semifinals for the second straight year, demolishing the Greenies 49-7.

Last year in Natchitoches, LCA fought off St. Charles Catholic 12-7 for the title while in 2019, the Knights whipped the Comets 41-14 in the title game.

“We’re not going to win a shootout, that’s not who we are,” Stein said. “We gave up 10 points in a minute and 30 seconds against them last year. The rest of the way, we played well. That’s the only way you can beat a team like this. They are extremely talented and extremely well coached. We got blown away two years ago. You don’t know what you are getting into until you play them. Hopefully, we can stay in it and have a chance in the fourth quarter.”

The Comets won their lone state championship in Class 3A in 2011 and will make their seventh championship game appearance, all since 2005.

For a team and school ravaged by Hurricane Ida with many young men still not back in their homes and with a team that has just one black jersey to wear as a result of storm damage to its other jerseys, the resiliency and toughness of a resilient and tough program continues to reveal itself.

(story by Ken Trahan of cresentcitysports.com)