When you play elite defense, are sound in the kicking game and are efficient on offense, you are going to win most of the time.

The description fits St. Charles Catholic perfectly and the Comets have won all of the time, thus far, in 2021.

The third-seeded Comets pitched their fourth straight shutout and their seventh of the season in a convincing 27-0 victory over No. 6 Dunham at Thomas Dupuy Stadium in LaPlace. 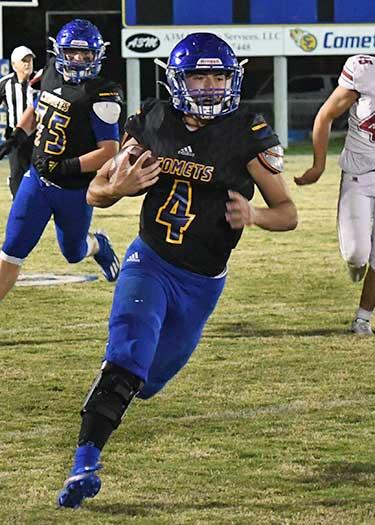 St. Charles Catholic got the only score it needed late in the first quarter when Ayden Authement hit Brady St. Pierre on a 5-yard touchdown pass to make it 7-0.

The lead grew to 14-0 in the second quarter on a 70-yard touchdown run by Zack Vicknair and it was 13-0 at halftime after a missed extra point.

After a scoreless third quarter, Authement hit St. Pierre on an 8-yard touchdown pass to make it 20-0 early in the fourth quarter.

Kaden Foster put the icing on the cake, returning a Hayden Hand interception 40 yards for a score later in the fourth quarter for the final score.

Comets head coach Wayne Stein said his team is coming together in all phases.

“Our defense has played lights out all year, allowing just three touchdowns total in nine games,” Stein said. “We’ve just been consistent, not with a bunch of superstars but with experience and guys who play hard. Our defensive coordinator, Jason Brown has done a phenomenal job.”

Stein violated rule 101 by replacing a legend in Frank Monica and has handled taking over from his uncle very well.

“Coach Monica left me with a great staff,” Stein said. “I have really been able to relay on our staff and punt to them. They have done a phenomenal job all year. Our offense has gotten better every week. Ty Monica has done an outstanding job in growing this offense, which is finding its identity.”

St. Charles Catholic would have been at least the second seed but lost power points as a result of forfeits by opponent De La Salle, causing the Comets to go to Crowley, rather than the Pios returning to LaPlace.

“It’s going to be tough,” Stein said. “I told the kids after the game we’re going to face a Hall of Fame coach and you are stuck with me. We have a total respect for Notre Dame. Our kids know exactly what it is going to take to win. It’s almost like playing ourselves. It’s almost a carbon copy of playing ourselves. They will play physical and they will always be in the right place. Our kids don’t care where we play, when we play or who we play. We were not sure we would even play after Hurricane Ida.”

It figures to be another outstanding contest.

“We expect nothing less,” Stein said.