The Comets celebrated homecoming with a big win over the Cohen Hornets 51-0. The offense, defense, and special teams all scored touchdowns in the game. The Comets remained undefeated for the season upping their record to 6-0.

The Comets opened up the scoring by tackling the Cohen punter in the endzone for a safety. On the ensuing kickoff Davon Sturgis scored on a 62 yard kick return for a touchdown. The Comet defense remained strong forcing an interception by Regdrick Hackett who returned it all the way for a 34 yard pick six. Sturgis scored the next two touchdowns on a 6 yard run and a 25 yard run. Carter Chauvin added all 4 extra points to give the Comets a 30-0 lead at the end of the first quarter. 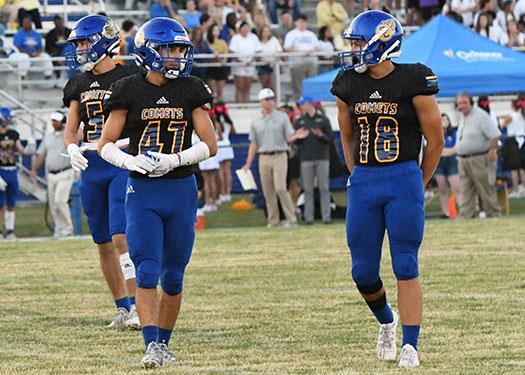 Zack Vicknair scored on an 11 yard run early in the second quarter. Jacob Landry scored a touchdown on a 5 yard run and Kayden Cambre scored the game's final touchdown on a 6 yard run. The score at halftime was 51-0. In the abbreviated second half the Comets played mostly younger players allowing them to get varsity experience.

After the game there was a 10 year anniversaries celebration for the 2011 state championship team. The 2011 Comets went undefeated with a 15-0 record and defeated Amite in the Superdome to win the school's first state championship in football.

The Comets will return to Dupuy stadium this Friday night to celebrate Senior Night. The Comets will be hosting South Plaquemine in a district game. Kickoff is for 7:00 PM.