Ayden Authement scored on a 24-yard run with 47 seconds remaining in the game to lift the Comets to a thrilling 12-7 victory over the Greenies in a District 11-2A showdown in a game seen nationally on NBC Sports Network. In a matchup of the Nos. 1-2 ranked teams in the Crescent City Sports Class 2A rankings.

The game-winning drive covered 80 yards in just six plays, taking 1:07 off the clock.

The score was set up by Austin St. Pierre, who came up with a big play on a 34-yard reception on a screen pass from Authement to the Newman 36-yard line. 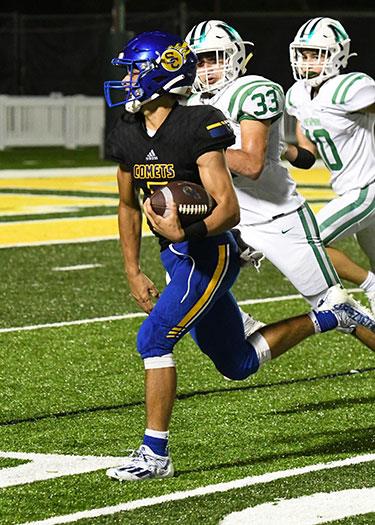 Authement raced 12 yards to the 24 before Authement scored the game-winner on a terrific run, making three Newman tacklers miss and diving just inside of the pylon for the touchdown.

The game started and ended well for St. Charles Catholic.

Michael Hotard intercepted Arch Manning on the third play of the game and returned it to the Newman 22-yard line. It was Manning's first interception of the season.

Carter Chauvin kicked a 24-yard field goal to give the Comets a 3-0 lead with 7:47 to play in the opening quarter.

The Comets got a stop and struck quickly as Ayden Authement completed a pass to tight end Brandon Kragle for 52 yards to the Newman 4-yard line. Once again, Newman stiffened and Chauvin booted a 20-yard field goal to make it 6-0 with 3:31 to play in the opening quarter.

Just before halftime, St. Charles Catholic got the ball at the Newman 41-yard line and reached the 24 but Chauvin came up short on a 41-yard field goal attempt.

Newman had just two first downs in the half.

On the drive, Manning scrambled 17 yards for a first down and converted a fourth-down conversion with a pass to Hunter.

The Comets had a drive which reached the Newman 28-yard line early in the fourth quarter but Ayden Authement was intercepted by Jack Robert to kill the drive.

Newman had a drive which reached the St. Charles Catholic 28-yard line but a 46-yard field goal attempt by Nieset was just short with 4:22 to play in the game.

Newman got the ball back with a chance to run the clock out but couldn't and had to punt.

Austin St. Pierre came up with a big 34-yard reception on a screen pass from Authement to the Newman 36-yard line.

Authement capped the drive with a terrific 24-yard touchdown run to provide the margin of victory.

On the play, Authement made three Newman tacklers miss and dove for the pylon and scored.

Newman had one final possession and reached the St. Charles Catholic 48-yard line but Matthew Loup Jr. got a huge sack on Manning to help seal the deal. A desperation pass on the final play of the game by Manning was knocked away and the Comets walked away with a huge win, exacting revenge after a 14-7 loss to Newman in 2020.

The Comets have overcome devastation in the LaPlace community from Hurricane Ida and have just one jersey, a black one, to wear as their other game jerseys were ruined by the effects of the storm.

“I get emotional just watching them play,” St. Charles Catholic coach Wayne Stein said. “What we went through and what we’re still going through, for them to come out here and lay it on the line for one another, it’s hard to not get choked up. We’re a River Parish community.”

Stein is immensely proud of his defense. 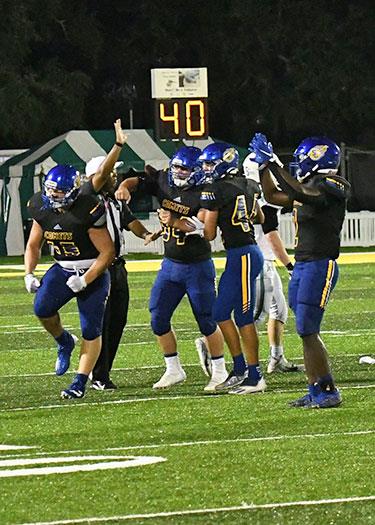 “We’re a tough-knit community,” Stein said. “We never ask anybody for help. We just pick up the pieces and help one another. It wasn’t pretty but they found a way to win. Our defensive coordinator, Jason Brown, he’s phenomenal. Most of the time, he’s playing chess and everybody else is playing checkers. They have a phenomenal offense.”

The offense came through when it mattered.

“I was really proud of the offense because I really got on them at halftime,” Stein said. “I was really disappointed in the performance most of the night. Ayden Authement didn’t play well but he’s a winner and he found a way to get it done in the end. I couldn’t be prouder of my coaching staff and kids because there’s no quit in them, just like our community.”

Nicholls commit Kaiden Jones was all over the field for the Comets while Moses Clark was stout up front at nose tackle as a good crowd of Comet fans watched.

“It’s a big motivation for us with the support we have, especially coming from (Hurricane) Ida,” Jones said. No matter who we play (or where), we’ve got a big crowd and that gives motivation to our defense. We had to fight adversity and come back and make plays. We came back, our offense had a big play. We came back and had to finish the game and we did.”

Both teams return to action next Friday.

St. Charles Catholic (5-0, 1-0) will host Cohen next Friday and celebrating Homecoming playing in Thomas Dupuy stadium for the first time this season.

(parts of story by Ken Trahan of Cresscent City Sports)