On a beautiful Friday night, the Comets traveled across the lake to face the Lakeshore Titans. After a slow start the Comets took control of the game in the second half and posted their 3rd shutout of the season defeating the Titans 22-0.

In all, the Comets (4-0) dominated both lines and held the football for nearly a full quarter more than Lakeshore (2-3).

The first and only points in the first half came by some trickery by the Comets, as St. Charles senior Zack Vicknair, who was filling in for injured starter Ayden Authement, faked a hand off, rolled out to his right and found a wide-open Dillon Brown for a 52-yard touchdown reception. they scored a two-point conversion on a run by Davon Stirgus that made it 8-0 with 5:06 remaining until halftime.

To open the second half, it was clear Lakeshore needed a great start and at least grab some momentum to show the Comets they could hang tough. Instead, they went backward, losing 12 yards and punting on fourth-and-22 from their 10. 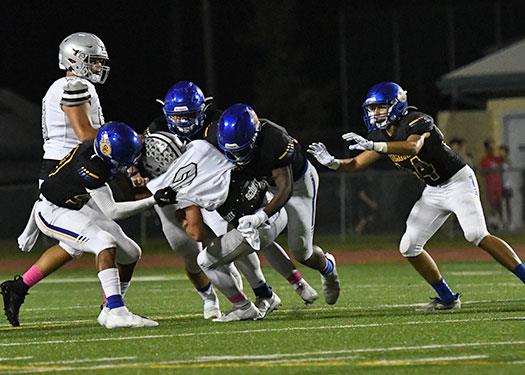 Eleven plays later the Comets scored with a 12-yard run by Zack Vicknair to all but put the game on ice at 15-0 with 4:28 remaining in the third quarter.

On the drive, the Comets chewed up more than six minutes and didn’t pass a single time. In fact, all four of their passes came in the first half.

Of the 45 plays the Comets ran, Vicknair was a part of nearly half of them — rushing 22 times for 90 yards and two touchdowns.

In all, the Comets dominated both lines and held the football for nearly a full quarter more than Lakeshore.

“We knew we had to make it an ugly game,” Stein said. “While our offense didn’t necessarily light up the scoreboard, they did an excellent job of limiting possessions. If you give Lakeshore enough at-bats, they are going to find a chink in your armor.

“So we were able to put a little separation between us and them, and it became a little one-sided. I can’t say enough about our kids and the preparation. … All the things going on with it being crazy (in LaPlace following Hurricane Ida), the football part has been as normal as it possibly could have been.

“Ugly football is who we are. In a day and age of ‘throw it 100 times’ and ‘basketball on grass,’ that’s not the St. Charles way.”

(parts of story by Jim Derry of VSN and Nola.com)