A drizzly Saturday afternoon did not stop the Comets from playing a solid game of football, as they defeated the Vandebilt Catholic Terriers 24-14 Saturday at Joe Keller stadium in Reserve. The Comets got off to a fast start scoring 21 points in the first quarter before holding off a Vandebilt second half comeback.

The Comets went to work immediately as Davon Sturgis scored the first touchdown with a 95-yard kickoff return only 14 seconds into the first quarter. 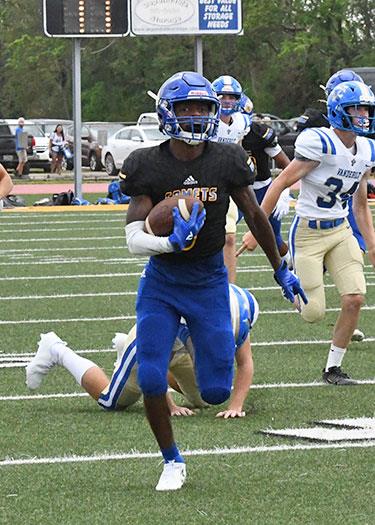 The Comets came into the fourth quarter determined to win and with 8:22 left, Carter Chauvin kicked a 39-yard field goal to extend the lead to 24-14. Although Vandebilt fought a hard fight, they were no match for the Comet defense, which amassed several sacks to ensure the Terriers would not score again. The Comet offense went on a long time consuming drive to help kill most of remaining time on the fourth quarter.

The Comets started fast and finished strong to record their 3rd win of the season and keep their undefeated season in tact. After the game the two teams gathered in the center of the field to pray together. Both schools were greatly affected by hurricane IDA and Vandebilt was also grieving over the loss over one of their coaches (Charlie Cryer) who passed away unexpectedly during the week.

The Comets travel to Mandeville to face the Lakeshore Titans this Friday night at 7 PM.

(parts of this story by Tara Williams of L'observatuer)