NEW ORLEANS – A pair of teams that played in state championship games a year ago finally got a chance to play a game Saturday at Tad Gormley Stadium.

Both St. Charles Catholic and De La Salle had to wait to week three to play.

Then, a rain and the threat of lightning delayed the scheduled start another hour.

Finally, the Comets and Cavaliers got to play. 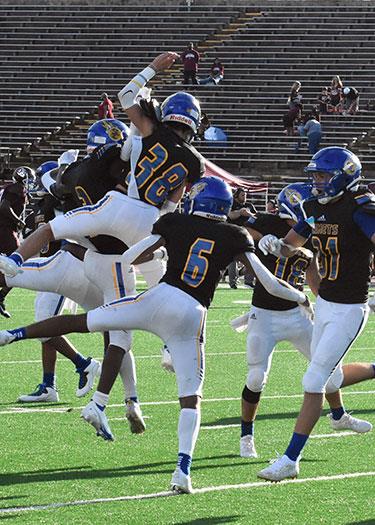 In a spirited, sometimes very spirited, hard-hitting game, two defenses slugged it out in brutal fashion.

In the end, one team took advantage of a kicking game mistake by its opponent and got a huge stop when it mattered most as St. Charles Catholic edged De La Salle 3-0 in a game seen live on CrescentCitySports.com and heard live on NASH ICON 106.1 FM.

After a scoreless first half in which neither team penetrated the red zone, De La Salle punter Kentrell Mollette, who was tremendous throughout in winning field position for the Cavaliers, had to field a low snap and was forced to run with the ball on a punt attempt and was tackled at the De La Salle 47-yard-line on the final play of the third quarter.

The Comets then came up with their only drive and it proved to be a game winner.

Carter Chauvin came on and kicked a 30-yard field goal to give the Comets a 3-0 lead with 7:21 to play in the game.

On fourth-and-two, Cavaliers coach Graham Jarrott, in his first game as the head coach at his alma mater, elected to go for it. Cole Milford was stuffed on a quarterback sneak and the Comets took over with 1:51 to play in the game.

De La Salle got a stop and St. Charles Catholic had one more shot, getting the ball back with 33 seconds left at the St. Charles 41-yard line.

Only able to move it five yards, Jermaine Roussell intercepted Cole Milford on the final play of the game to secure the win for first-year head coach Wayne Stein and his Comets.

Michael Hotard also had an interception for the Comets while Kenneth Vaughn had a blocked punt for the Cavaliers.

Both teams, particularly De La Salle, had to deal with cramping issues throughout the warm afternoon. The Cavaliers

“Our defense played tremendous but we missed some opportunities on offense,” Jarrott said. “I thought we should have been up at halftime. I told the kids at halftime it would come down to one or two plays. It was so hot on the field. We played hard. They played so hard but we knew that would be the case. Mollette did an awesome job punting. These are the games you want to play. We will get better.”

It was a wonderful moment and result for the Comets, who saw their LaPlace community devastated by the impact of Hurricane Ida, with many dealing with massive home damage.

“Credit our kids and coaches who have been through so much,” Stein said. “We talked about it being different, overcoming adversity and they really showed it. You had bodies laying all over the ground, there’s two teams going to war. We have so much respect for De La Salle. I just can’t say enough about our community. Our team played just like our community. They picked up the pieces.”

“When I called practice this week, it could have been in the Sahara desert and they showed up, 85 guys showed up and I couldn’t be prouder of not just our team but our whole community and my coaching staff. What a staff I have and the job that they did, not just tonight but getting houses for players and doing the things in the community and then coming out and holding these kids to a higher standard.”

For a day, things were back to normal for the Comets and that normal included playing the consistently great defense and making a play on special teams that mattered, staples of the program under legendary coach Frank Monica.

Now, Stein, who has been such a big part of the success under Monica, has a team with the same characteristics and it paid off.

Individual Passing:
SCC—Ayden Authement 7-for-12 for 55 yards, Dillon Brown 1-for-1 for 9 yards