St. Charles Catholic is one of the most consistently outstanding football programs in Louisiana.

It will be strange in 2021, not seeing legendary coach Frank Monica on the sideline. His intensity, screaming and coaching his heart out for the Comets have been staples in local high school football.

An illustrious career of 284 victories in 30 seasons at the prep level left with Monica, who led St. Charles Catholic to six state championship games and won both a state title at Lutcher and another at Riverside. He also did a solid job at Jesuit.

Sandwiched in between were two stints at Tulane as an offensive assistant coach. 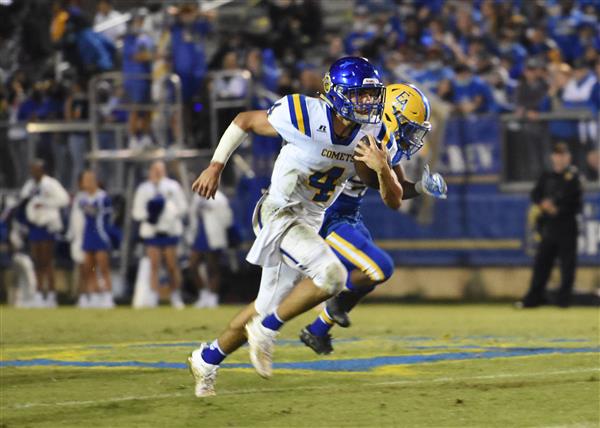 In his last chapter, Monica guided his Comets to the Division III state championship game, falling to powerful Lafayette Christian 12-7 in Natchitoches.

As defensive coordinator for many years, Stein is well prepared to handle the job after 17 years on Monica’s staff.

The ties run deep as Stein is Monica’s nephew and he is a graduate of St. Charles Catholic (Class of 1999).

“It is definitely different being the head coach,” Stein said. “You are in a different seat. I am almost like a defensive assistant now and I was running the defense previously and now I am the head coach. You now have to make all of the tough decisions. I am blessed to have had the leadership of Coach Monica to prepare me but there are things you must learn on your own and I am learning.”

The Comets are still solid, with 11 returning starters from a year ago.

“I really like our team from an effort perspective,” Stein said. “We are a hard working group.”

That includes five on offense.

Senior running back Zack Vicknair (pictured above) moves from quarterback to be the primary ball carrier. At quarterback last season, the 5-foot-11, 190-pound Vicknair rushed for 857 yards and 10 touchdowns.

“Zack will be used in a variety of places,” Stein said. “We know he can do so much for us. His best quality is his leadership. It is not about talking loud all the time. He leads by example. He is one of the first to arrive and last to leave. His work ethic is contagious. He goes downhill hard and he can catch the ball and he can block.”

The new starter at quarterback is junior Ayden Authement.

“Ayden has done an excellent job and he will certainly help us,” Stein said. “He does a little bit of everything. He is not extremely tall but he does it well. He throws an extremely tight spiral and puts the ball on the money and he is still a plus athlete. He is shifty and can make things happen with his feet. He’s a gunslinger.”

Senior wide receiver Dillion Brown (5-9, 170) is the top wide receiver, the only player at the position back from a year ago. He will be joined by seniors Devon Sturgis and Austin St. Pierre.

“We do not have a lot of experience at wide receiver,” Stein said. “We are looking for players to emerge.”

“Kragle is a talented player who will only improve as he matures,” Stein said.

The offensive line is solid with three seniors back as returning starters in center Mo Nabut, along with Jake Jeandron and Eric Cador (6-0, 255). They will be joined by juniors Eric McGee and Abdel Nabut.

“We’re not a young offense,” Stein said. “It is guys who have been in the program and know the standard of the program and what we expect from them. We have experience up front and that will help. We are going to run the football. That is who we are. Ty Monica is our coordinator and he will do an excellent job and put his spin on the offense.”

Up front, senior Moses Clark (5-9, 305) is back to anchor the defensive line. A year ago, Clark was in on 54 tackles, including 8.5 for loss with three sacks while forcing a fumble and recovering another fumble.

Also back up front is senior Brock Dunn, who had 45 tackles, including 5.5 for loss with three sacks last season. Junior Britten Dean (5-8, 230) also returns after starting games last season.

“We are very experienced and very good up front on defense,” Stein said.

The linebacker spot is highlighted by senior Kaiden Jones, the leading returning tackler with 80 stops last season, including an amazing 19.5 for loss and 8.5 sacks. Jones forced a pair of fumbles and recovered one fumble.

“We moved Jones to linebacker to replace Eugene,” Stein said. “We think it will help him in recruiting.”

Jones will be joined by junior Matthew Schexnayder.

In the secondary, senior free safety Bryce Bertucci (5-7, 150) is the standout after a junior season of 40 tackles, including seven for loss with three sacks. Bertucci forced a pair of fumbles and had an interception.

“Jason Brown is an experienced defensive coordinator taking over our defense, having worked at East Ascension and Dutchtown,” Stein said.

Carter Chauvin will handle kicking duties and Bertucci is the punter.

The season opens in Marrero at Archbishop Shaw on Sept. 3.

The final non-district game is a tough trip to Mandeville to take on Lakeshore.

District 11-2A play opens with a showdown in LaPlace against an outstanding Newman squad on Oct. 15. Home games against Cohen and South Plaquemines are next before the regular season finale at Fisher.

“I don’t think it is a schedule that a first-year head coach would put together,” Stein said. “We’re excited to play a Catholic League team in Shaw. Lutcher has a great history and it is a rivalry. De La Salle is a rivalry and elite. We will play at Jefferson County, Mississippi. Vandebilt and Lakeshore are 4A programs who have had success. Newman is on national television. South Plaquemines will be tough. It will be a grind.”

Despite losing a great coach in Monica, the Comets are well equipped, on the field and on the sideline to maintain the elite level program it has been.

“We have to be tough, we have to be physical to reach the goals that we have,” Stein said. “We will be better in the end with our schedule.”

(story by Ken Trahan from crescentcitysports.com)